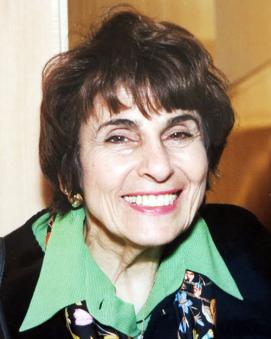 A tribute from Christina Maranci, Chair of Department of the History of the Art and Architecture

On 20 September, 2021, Lucy Der Manuelian passed away at her home in Belmont, Massachusetts (USA). Dr. Der Manuelian (fondly referred to by many of us as “Lucy”) was the founder and first occupant of the Arthur H. Dadian and Ara T. Oztemel Chair of Armenian Art in the Department of the History of Art and Architecture at Tufts. The Tufts chair is the first and only endowed professorship of Armenian art outside the Republic of Armenia. It was launched in 1984 as a rotating lectureship at Tufts in conjunction with Harvard, McGill, Boston, and Northeastern, so that courses in Armenian art could be taught at each institution in succession. In 1989, the lectureship became an endowed position with a permanent home at Tufts. This owes entirely to Lucy’s energies, and the financial support of New Deal attorney Arthur H. Dadian and import/export magnate Ara T. Oztemel, the latter known for bringing Coca-Cola to the Soviet Union. Lucy retired in 2006.

Lucy was educated at Harvard (Radcliffe), and, after a twenty-year hiatus from academia in which she raised two children, received her Ph.D. at Boston University in 1980. Her dissertation was supported by a fellowship at the Bunting (now the Harvard-Radcliffe) Institute (1971-1973), and an IREX (International Research and Exchange Board) grant in 1977 for travel to the Soviet Union. The project, supervised by noted scholar of Islamic art, Oleg Grabar, concerned the medieval sculptural program of Geghard, and was the first serious English-language monograph on that site. Lucy’s project was innovative in its comparative approach to the monument, considering the sculptural program of Geghard in relation not only to Armenian iconography, but also to the artistic traditions of Byzantium and Islam. Her dissertation is also widely considered to be the first American dissertation dedicated to Armenian art.

Lucy lent her expertise in Armenian art and architecture to a range of scholarly projects, authoring articles on major Armenian monuments and artistic themes for Dictionary of the Middle Ages (1982-1989) and Grove Dictionary of Art (now Oxford Art Online). She was an author and researcher for the massive microfiche work known as Armenian Architecture (Zug: Inter Documentation, c. 1980-c.1990). She contributed articles to several important Armenological volumes, including Medieval Armenian Culture (Thomas Samuelian, ed., Chico: Scholars Press, 1984). In addition to work on Armenian architecture and sculpture, Lucy published widely on a variety of topics within Armenian art. Among her most noted projects are her publications on carpets, including the exhibition catalogue, Weavers, Merchants, and Kings: The Inscribed Rugs of Armenia- Kimbell Art Museum (Forth Worth, Kimbell Art Museum 1984) which provided a crucial English-language scholarly foundation for the history of Armenian rug weaving. Lucy’s interests also extended to the study of important Armenian-Americans, including Moses Gulesian. In addition to contributing to conventional academic projects, she was remarkably prescient about technology, making use of film and the internet (as early as the 1990s) in her pedagogy and research.

Lucy is best known in the Armenian community as a tireless advocate for Armenian art, lecturing to audiences around the world, and educating Armenians in the US about their rich medieval cultural heritage. Almost everyone in the community has a “Lucy story” about the first time they heard her lecture. She was an activist for Armenian cultural heritage long before that concept became familiar to us all.

Lucy was fearless, physically and psychologically. Before the era of drones, she hung out of helicopters to take good aerial shots of monasteries and churches. At the height of the Soviet period, the KGB suspected that she was a spy because of all her travel and photography. One night the they visited her in Yerevan, and, to avoid handing over the film, Lucy hid it inside her dress, daring them to manhandle her. Art history won and we have the photographs.

As everyone who knew her can attest, Lucy was unconventional and indomitable. An avid tennis player, she had boundless energy. She believed in using every minute: she kept a stack of books in the car and read at every stoplight (often to the consternation of drivers behind her). She kept apples and packets of cheese and crackers in her pockets to eat on the go, but was also a very fine chef, such that Julia Child came to her house for dinner and enjoyed Lucy’s chicken cooked with cherries. Lucy sometimes held office hours in her car if she couldn’t find a parking spot.

Along with her family and friends, the entire Armenian community, the Tufts community, her students, and her colleagues, I am intensely sad to know that Lucy is no longer with us. She was a life force for Armenian art. I was so fortunate to learn from and be mentored by her. I think she was happiest standing in front of an audience, sharing her knowledge about Armenian art. I remember her telling me that before beginning a presentation, you should pause and smile at your audience (she had a thousand-watt smile). I hope she is doing that now, giving her “helicopter lecture” (as we affectionately called it) and teaching a whole new audience about Armenian art.