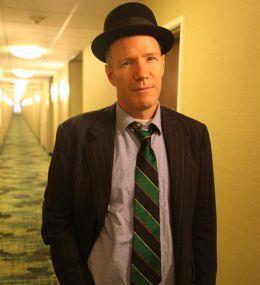 Rick Moody was born in New York City. He attended Brown and Columbia universities. His first novel, Garden State, was the winner of the 1991 Editor's Choice Award from the Pushcart Press and was published in 1992. The Ice Storm was published in May 1994 by Little, Brown & Co. Foreign editions have been published in twenty countries. (A film version, directed by Ang Lee, was released by Fox Searchlight in 1997.) A collection of short fiction, The Ring of Brightest Angels Around Heaven was also published by Little, Brown in August 1995. The title story was the winner of the 1994 Aga Khan Award from The Paris Review. Moody's third novel, Purple America, was published in April 1997. Foreign editions have appeared widely. An anthology, edited with Darcey Steinke, Joyful Noise: The New Testament Revisited, appeared in November 1997. In 1998, Moody received the Addison Metcalf Award from the American Academy of Arts and Letters. In 2000, he received a Guggenheim fellowship. In 2001, he published a collection of short fiction, Demonology, also published in Spain, France, Brazil, Germany, Holland, Portugal, Italy, the United Kingdom, and elsewhere. In May of 2002, Little, Brown & Co issued The Black Veil: A Memoir with Digressions, which was a winner of the NAMI/Ken Book Award, and the PEN Martha Albrand prize for excellence in the memoir. His novel, The Diviners was published in September 2005 and won the Mary Shelley Award from the Media Ecology Association. It appeared on "best of the year" lists in San Francisco, Los Angeles, Washington, Boston, and elsewhere. Since 2005, he has published a collection of novellas, Right Livelihoods, a novel, The Four Fingers of Death, a collection of essays on listening entitled On Celestial Music. In November 2015, he published a new novel, Hotels of North America. It was long-listed for book of the year at the Brooklyn Public Library. His most recent work is the memoir, The Long Accomplishment (Henry Holt, 2019). His short fiction and journalism have been anthologized in Best American Stories 2001, Best American Essays 2004, Best American Essays 2017, Year's Best Science Fiction #9, and, multiply, in the Pushcart Prize anthology. His radio pieces have appeared on The Next Big Thing and at the Third Coast International Audio Festival. His album Rick Moody and One Ring Zero was released in 2004, and three albums have been released by The Wingdale Community Singers, including music and words by Moody. He has also released an album under the name The Unspeakable Practices with drummer Kid Millions (2015). Moody is a past member of the board of directors of the Corporation of Yaddo and currently serves on the board of Archipelago Books. He is former secretary of the PEN American Center. He co-founded the Young Lions Book Award at the New York Public Library. In May 2018 he received an Award in Literature from the American Academy of Arts and Letters. In 2019 he became an Officier de L'Ordre des Arts et des Lettres, as awarded by the Republic of France. Moody has taught at New York University, Yale University, Princeton University, and Brown University.
Read More Career Highlights / Publications Professional Activities Courses / Teaching Activities