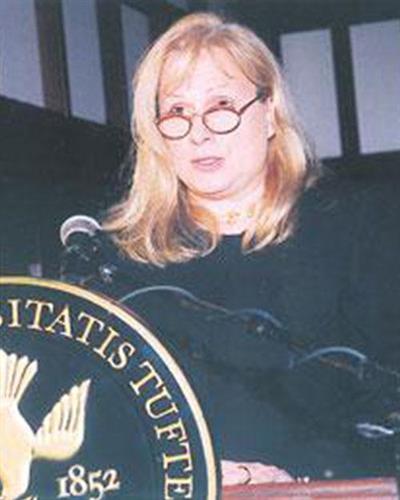 Ina Baghdiantz McCabe came to Tufts in 1998, after a decade of teaching, to be the first holder of the Darakjian and Jafarian Chair, an endowed chair in Armenian history established by a Tufts alumna. She became a historian by choice after being sent to medical school for some years. She has lived in eight countries and was schooled in six languages before the age of 18, the many cultures that became her own sparked her interest in history. To cover her wide interests she went to graduate school twice: once to study European history at the Sorbonne in Paris and later to study Armenian history and Middle-Eastern history in New York at Columbia. Her dissertation at Columbia focused on New Julfa in Iran, the Armenian diaspora and their international merchant networks, it argued based on archives held in New Julfa that the merchant elite was part of the Safavid administrative system, and the Armenians were the chief importers of silver in an age where the flow of silver was a key to economic life, it was published in 1999. With several scholars specialists of Iran she published a book on Safavid Slavery. She is the author of several books and numerous articles. Her latest monograph is on Orientalism in Early Modern France. Her publications have been on different themes, the silk trade, the spice trade, slavery, diaspora, travelers and orientalism, yet they are all transregional studies which focus on economic and intellectual exchanges within Eurasia in the early modern period. Her work has been supported by several fellowships, the last was at the Radcliffe Institute at Harvard. At Tufts she was honored to receive the Faculty Research Awards Committee's Distinguished Scholar Award in May 2008.

She enjoys both writing and research and teaches both undergraduate and graduate courses in the history department. The first courses she developed at Tufts in 1998 were Modern Armenia/The Caucasus, courses on the history of food, consumption and on travelers. She is part of the core faculty of IR and affiliated faculty to the Fares Center.
Read More Career Highlights / Publications Professional Activities Courses / Teaching Activities