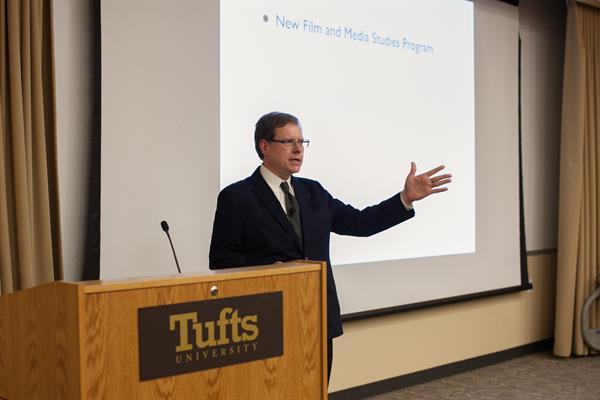 Malcolm Turvey is the Sol Gittleman Professor in the Department of the History of Art & Architecture. He joined Tufts in 2015 to launch the new Film & Media Studies Program, and was its founding Director from 2015 until 2021.

Turvey received his Ph.D. in Cinema Studies from New York University in 2002. He has been an editor of the journal October since 2001, and serves on the editorial board of Projections: The Journal for Movies and Mind. He works primarily in the areas of film theory, the philosophy and aesthetics of film, avant-garde film, and film and modernism. In addition to numerous articles, he is the author of three books: Doubting Vision: Film and the Revelationist Tradition (Oxford University Press, 2008), The Filming of Modern Life: European Avant-Garde Film of the 1920s (MIT Press, 2011), and Play Time: Jacques Tati and Comedic Modernism (Columbia University Press, 2019). He is also co-editor of Wittgenstein, Theory, and the Arts (Routledge, 2001) and Camera Obscura/Camera Lucida: Essays in Honor of Annette Michelson (University of Amsterdam Press, 2003).

Turvey is currently working on three book projects. The first, tentatively titled In Defense of Humanistic Explanation: Film, Art, and the Sciences, is a theoretical book that comes out of Turvey's long-standing interest in what the sciences can, and cannot explain, about film and the other arts. It seeks to defend the humanities against scientific encroachment by arguing that only humanistic methodologies--which Turvey collectively refers to as "humanistic understanding"--can answer certain kinds of questions about the arts. A section of this book, criticizing neuroscientific explanations of film, was published as a guest entry on film scholar David Bordwell's blog: http://www.davidbordwell.net/blog/2020/05/03/can-the-science-of-mirror-neurons-explain-the-power-of-camera-movement-a-guest-post-by-malcolm-turvey/.

The second book project, provisionally titled Against Post-Cinema, is another theoretical book that criticizes the various theories of "the post-medium condition" and "post-cinema" that have become dominant in cinema studies and art history of late. The third, Mad Men and Modernism, aims to explore how the television show Mad Men (2007-2015) adapts some conventions of literary modernism into a serialized form.
Read More Career Highlights / Publications Professional Activities Courses / Teaching Activities