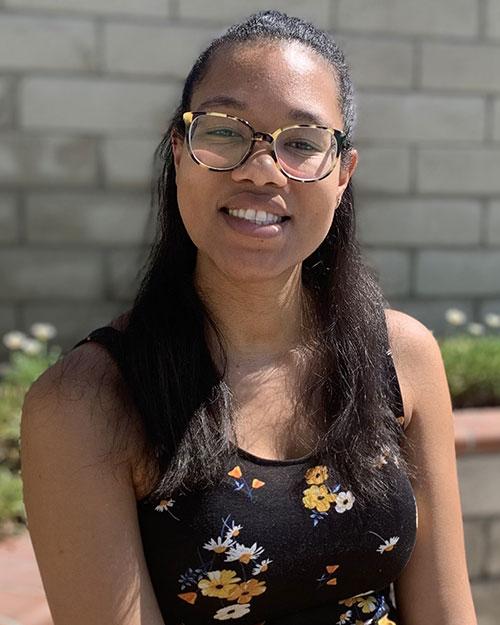 Aubrey graduated from Stanford University with a BA in Art History and a minor in Civil Engineering in 2018. Since then, she has worked at a number of art institutions across North America including the Cantor Arts Center, the San Jose Museum of Art, the Djerassi Resident Artists Program, and the Jessica Silverman Gallery. At Tufts, Aubrey is interested in studying the intersection between art and racial justice for the Black community as well as studying inter-ethnic representation of Black figures by non-Black artists of color. Outside of academia, Aubrey has a number of hobbies including playing piano, practicing ballet, and reading. 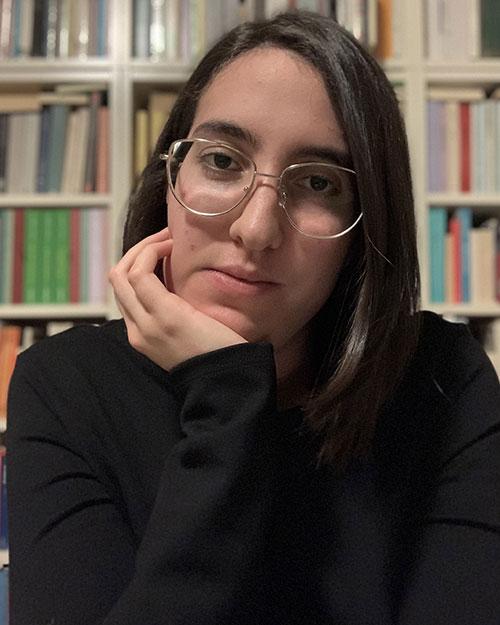 Francesca was born in Ferrara, Italy, but moved to the United States and remained there until college. She earned a BA from the University of Wisconsin-Milwaukee, where she double-majored in art history and Italian studies. She began her studies by participating in the UR@UWM Undergraduate Research Program, working on a community history project title “Picturing Milwaukee Architecture: A Digital Humanities Research Project and Exhibit.” The following year, Francesca studied abroad in Florence and interned with Mus.e, an organization that connects the civic museums of Florence with the public. Throughout this internship, she was able to aid in a diverse array of guided tours at museums like Palazzo Vecchio, Santa Maria Novella, and the Museo 900. Back in Milwaukee, she also interned at the Emile H. Mathis Art Gallery, where she was able to research a 16th century preparatory drawing of Charon by Giuseppe Crespi.  After graduating, Francesca earned an MSc in History from the University of Edinburgh, for which she was awarded the Fennell Masters Scholarship. Her thesis was titled “Di modo suo e di suo cervello: Isabella d’Este as an Ambassador for the Este in Mantova”, and examined Isabella d’Este’s role as an ambassador between her birth family in Ferrara and her husband’s in Mantova. More broadly, Francesca is interested in 15th and 16th century art, particularly the representation of family and emotion, LGBTQ+ identities, and noble women’s agency, especially in city-states ruled by condottieri. 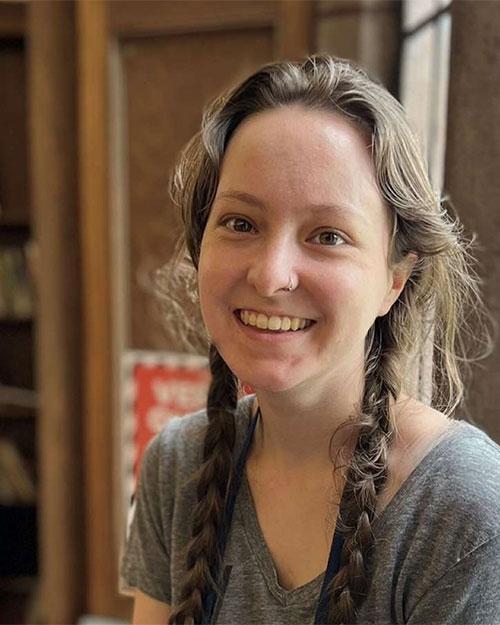 Issy earned her undergraduate degree in Art History and Psychology from Mount Holyoke College. While in school she worked with both the Museum of Fine Arts, Boston and the Eric Carle Museum of Picture Book Art. Most recently, she was one of the ’22 Cole Fellows at the Thomas Cole National Historic Site where she created and facilitated a new series of nature based art making activities and conducted original research on the history of land protection in the U.S. and our changing relationship with these protected spaces. Since coming back to the Boston area, she’s returned to the MFA as a museum educator and homeschool teacher. At Tufts she hopes to continue learning and thinking about museums and museum education as well as the interconnections between art, science, and the natural world. 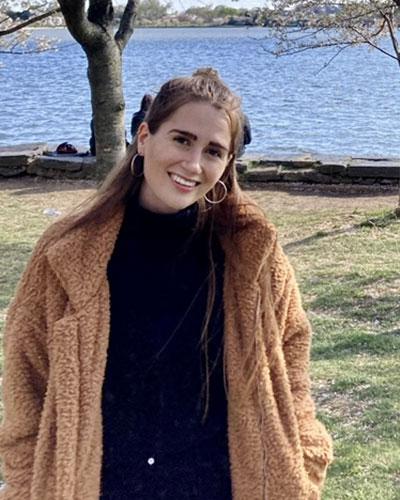 Ally graduated from Kenyon College in 2019 with a BA in Art History and a minor in Anthropology. During her undergraduate career, she interned as a docent in the college’s art gallery and worked as a research associate in the Art History department’s Visual Resource Center, cataloging and translating Napoleonic documents in the collection. She has also held various internships in D.C. with the Smithsonian Institution and in commercial galleries. After working in the private sector as a financial analyst for two years, Ally is returning to her art historical studies at Tufts in the hopes of pursuing a career in museums. Her primary interests include museology, disability studies, and the history of photography. 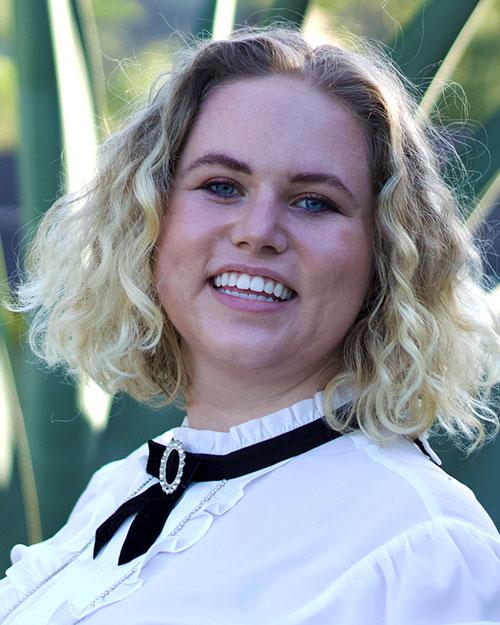 Rileigh graduated from the University of California, Berkeley with a B.A. in the History of Art. While in undergraduate, they worked at the Phoebe A. Hearst Museum of Anthropology as a research apprentice to the Head of Registration. They received a fellowship from the Undergraduate Research Apprenticeship Program to continue their work at the Hearst by digitizing old accession files and their corresponding objects. Here, Rileigh discovered their love of museum work, which they will continue to pursue during their time at Tufts and into their career. They hope to one day create exhibitions that explore and facilitate discussions on the diversity and longevity of queerness - both in sexuality and gender - within art history. At Berkeley, Rileigh presented their research on Etruscan mirrors at the “Etruscan Identities: Image and Imagination Workshop,” where they were the only undergraduate to be invited to speak. After graduation, they guest lectured for an Etruscan wall painting class and discussed their research on the use of Egyptian blue in tomb paintings. Inspired by their honors thesis on Sappho’s shift in iconography from venerable mother to voracious lesbian in 19th-century France, Rileigh will push their research further and focus on the intersections of visual culture and gender(queerness) within 19th and 20th-century Europe. 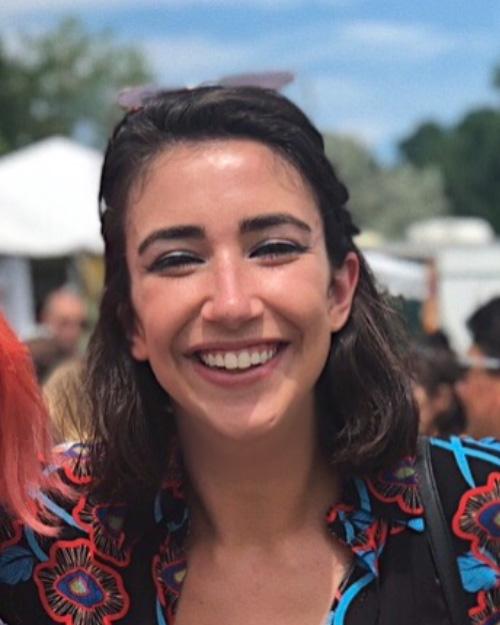 Madi began studying Art History while on a gap year program that travelled across Europe to study works in situ. This led her to pursue her undergraduate degree in Art History at Wheaton College, Massachusetts, with research interests surrounding feminist revisions of colonial narratives in contemporary American works. She interned at both the Shelburne Museum and the Peabody Essex Museum, and worked as a Senior Collections Assistant in the Wheaton College Permanent Collection throughout her undergraduate career. In one of the only undergraduate courses of its kind, Madi co-curated the jury-winning curatorial design for It’s Elemental: Fire(2018), which the class then developed, marketed, and installed. Madi got the chance to continue her studies in Johannesburg and Cape Town, where she examined post-Apartheid constructions of race and gender in contemporary South African photography and sculpture. At Tufts, she plans to continue studying anti-colonial discourses by focusing on contemporary artists, works, and visual culture that subvert hegemonic narratives. 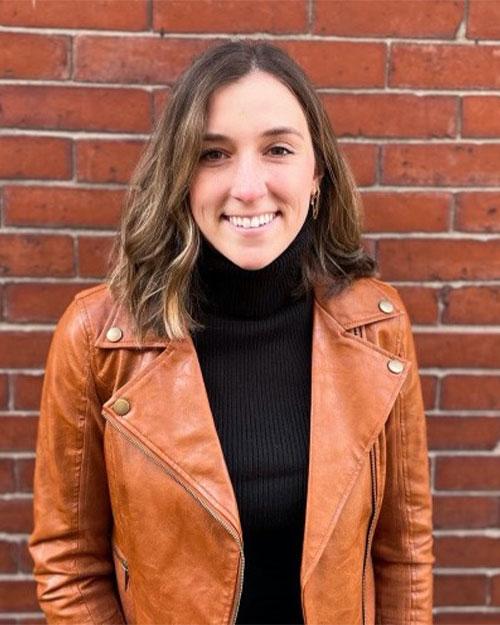 Kate Criscitiello graduated from Middlebury College where she earned an Honors BA in History and minored in English. During her undergraduate career, Kate held internships in publishing and international relations before finding her passion for art history and museum studies while studying abroad at the University of Oxford. Since then, Kate has been able to intern in a wide variety of museums, including the Hingham Historical Society, the Nichols House Museum, and the Peabody Essex Museum.

Kate’s scholarship takes an interdisciplinary approach as she studies 19th century visual culture relating to the visual rhetoric of American empire. She has a specific passion for studying World’s Fairs, a topic she wrote about in her senior thesis comparing the architectural representation of both France and Germany at the 1937 Paris Universal Exposition. She continues to study this subject by writing about the 1901 Pan-American Exposition for one of her qualifying papers. 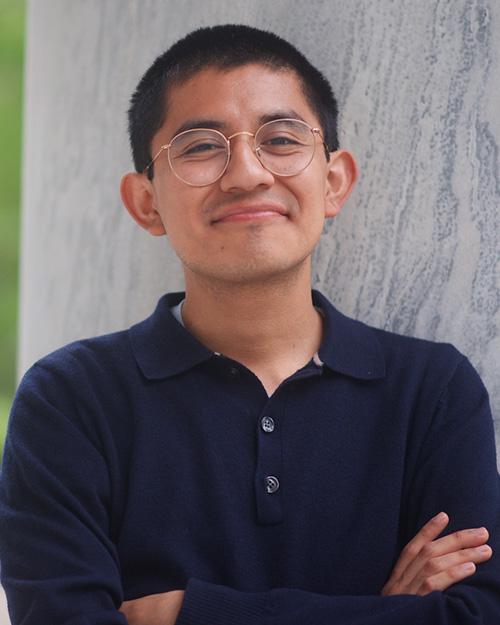 Originally from Oaxaca, Mexico, Rafael grew up in Florida until he left to attend Middlebury College. At Middlebury, Rafael earned his B.A. in film studies and Italian. For his work in the Italian department, he was awarded the John and Irene Mangione Italian Department Award. His senior thesis titled Gesture and Ethics in Film, which was awarded departmental honors, dealt with the film theory of Italian philosopher Giorgio Agamben and contemporary Italian neo-realist films. Rafael's interest in art history began in his junior year when he took contemporary art history graduate courses at the famous Accademia di Belle Arti in Florence, Italy. At Tufts, Rafael hopes to look at the theoretical development of the film avant-garde. Apart from this, he is also interested in experimental film, video art, and broader issues in contemporary art. Because of his interdisciplinary background, he seeks to research topics in film studies, art history, and philosophy. Outside of academia, Rafael has a deep passion for learning languages. He is fluent in Spanish, Italian, German, and is currently in the midst of strengthening his French. 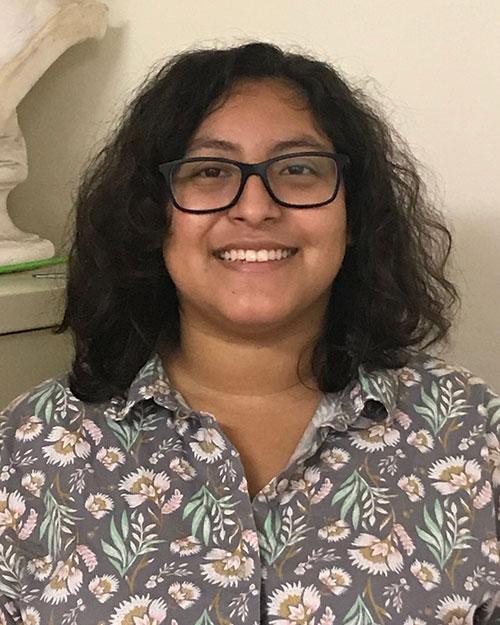 Alyssa graduated from Boston University with a BA in History of Art and Architecture and a minor in Biology. While at BU she concentrated on architectural history and later developed research interests in colonial and contemporary Latin American art history. Alyssa was focused on pre-med for most of her undergraduate career before ultimately deciding to pursue a career in academia. She is dedicated to expanding research in non-Western subjects and diversifying academic perspectives in art history. Her interest in Latin American art history is fueled by her own ancestry and her work as an English language teacher in Chelsea, MA. 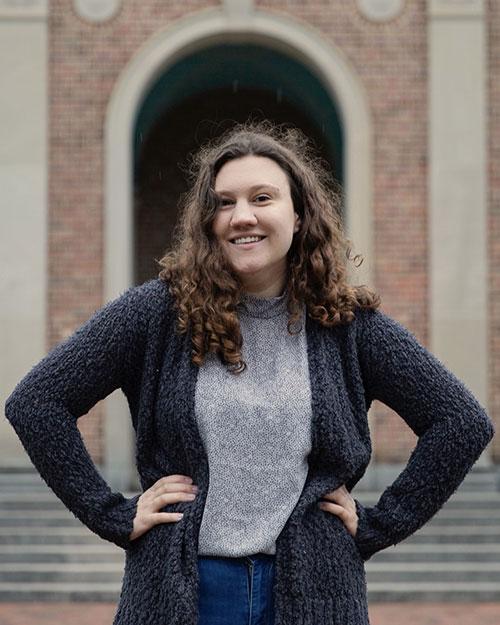 Emmi (she/her/hers) is a 2021 graduate from UNC Chapel Hill in her home state of North Carolina. At UNC, Emmi double majored in Classics and History, focusing specifically on Classical Archaeology and Ancient History. She also minored in Art History and Folklore. During her time at UNC, she worked as the Student Assistant Curator in the North Carolina Collection in UNC's Wilson Special Collections Library. Through this role, she helped to curate three exhibits, the most recent being, "Organized Womanhood: North Carolina Women and the Ongoing Struggle for Political Inclusion." Emmi also interned at the Duke Homestead State Historic Site in Durham, North Carolina where she helped develop curatorial projects and educational materials for a virtual school year. Emmi's academic interests primarily revolve around sacred ancient art of the Classical and Hellenistic worlds. She is also deeply interested in museology, the history of museum collections, and how the museum field can work towards social justice and inclusivity. At Tufts, Emmi is excited to engage more in these interests and deepen her understanding of ancient art and art history, as well as explore all the amazing museums and historic sites Boston has to offer. 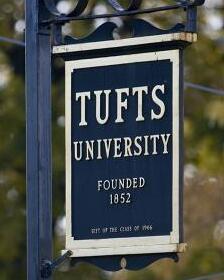 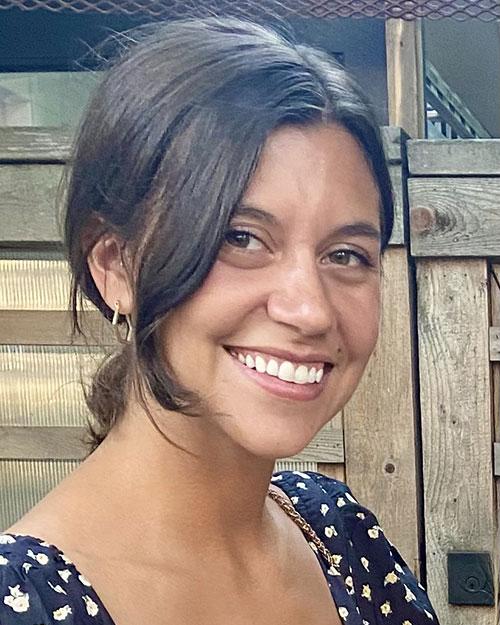 Emily Kassebaum graduated from Washington State University, where she received a B.A. in History and a double major in Art History. Her undergraduate research activities focused on investigating cross-cultural sense-making out of experiences of exchange, culminating with her senior thesis on the transcultural adoption of floral motifs by the Iroquois and unique adaption of the motif's significance in embellished, beaded bags. After graduation, Emily interned at the Whitney Western Art Museum in Cody, WY and held various positions at the Bellevue Arts Museum in Bellevue, WA. Interested to learn more about the funding side of the nonprofit sector, she pursued an opportunity to work at the Bill & Melinda Gates Foundation before ultimately deciding to return to graduate school in Art History. While at Tufts Emily intends to pursue her interests in American and Native American Art, examining artists and their works within spheres of exchange such as United States expansionism, commercial art markets, institutional collections, and public exhibitions to surface ideas in perception, the interpretation of mutual experience, and the frameworks employed for sense-making. 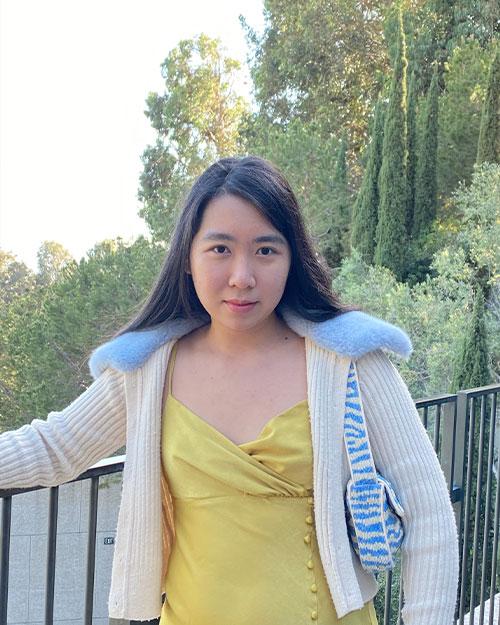 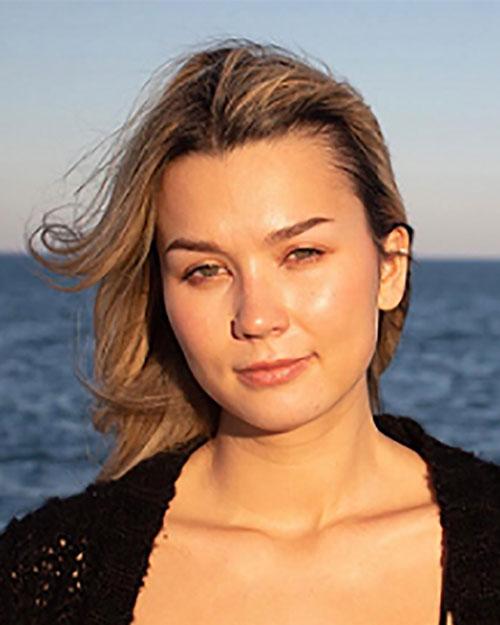 Kalin earned her BA in Public Affairs with a minor in Nonprofit Management from the Ohio State University. During her undergraduate career, she interned with Make A Wish of Ohio, Kentucky and Indiana. After graduation, Kalin moved home to Chicago and worked for local nonprofits, such as Legal Aid Chicago, After School Matters, and, most recently, the Museum of Contemporary Art (MCA). At the MCA, Kalin conducted donor prospect research. She worked closely with the curation team by attending information and prospecting sessions for each exhibition. She is most interested in studying ancient and contemporary art during her time at Tufts.