The BA in Arabic Language & Cultural Studies gives students a strong foundation in Modern Standard Arabic, and offers a wide range of courses - taught in English - on modern and classical Arabic literatures, cinema, gender and other cultural topics.

The BA in Chinese Language & Cultural Studies is designed to equip students with a solid foundation in cultural and linguistic literacy, an in-depth understanding of the Chinese literary tradition, and critical awareness of contemporary cultural issues through studies of literature, film, and other cultural products.

Students who select the BA in German Language and Cultural Studies engage in the study of German language, literary and nonliterary texts, film, and material culture, leading to a deeper understanding of German culture as well as transcultural competency. They may focus their course work on a particular author, period, or paradigm and are encouraged to consider broader questions about the nature of interpretation and literary criticism.

Interdisciplinary in nature, the BA in German Studies gives students the opportunity to explore the German language and intellectual tradition through literary and nonliterary texts, film, and material culture, while including perspectives of a variety of fields, including Art History, History, Film and Media Studies, Music, Philosophy, or Political Science.

Being multicultural and interdisciplinary, the ILVS program is similar to International Relations (IR), though with a stronger emphasis on the arts and humanities. As one of Tufts more challenging majors, ILVS requires an honors thesis or project from all graduating seniors. The ILVS program is another reason why Tufts is an excellent place to pursue international studies.

The Japanese program offers a solid foundation in the Japanese language. It also introduces students to many facets of Japanese culture, covering ancient, medieval, modern, and postmodern periods. Our focus is primarily on literature, film, popular culture, and anime.

The BA in Judaic Studies gives students the opportunity to explore the experience and diverse cultural heritage of the Jewish people from various perspectives. The program comprises the courses listed under Hebrew and Judaic Studies, as well as a number of courses in other departments.

The BA in Russian & Eastern European Studies offers students training in the history, politics, literature, and arts of Russia and the nations of Eastern Europe, as well as a grounding in contemporary oral and written Russian.

The BA in Russian Language & Cultural Studies at Tufts University offers a variety of courses and activities designed for students who wish to learn the Russian language, study Russian literature and film, and immerse themselves in Russian culture.

The Minor in Arabic is intended for students interested in learning the Arabic language and increasing their knowledge of the Arab world and its cultures.

The Minor in Chinese is intended for students wishing to apply their training in Chinese to a broad range of professional and academic pursuits.

The Minor in German offers students the opportunity to attain a thorough knowledge of the language, literature, and general culture.

The Minor in Hebrew's goal is to train students in all four skills (listening comprehension, reading, writing, and speaking) of Modern Hebrew. Starting in the first level, the Program teaches the language not only through textbooks, but also through examples gathered from contemporary Israeli culture – music, newspapers, radio, internet, novels, poetry, academic texts, TV shows, films, and so forth.

The Minor in Japanese offers a strong foundation in the Japanese language and introduces students to many facets of Japanese culture from the classical to the postmodern through studies of literature, film, and visual culture.

The Minor in Judaic Studies gives students an opportunity to study the history and cultural heritage of the Jewish people through literature and film.

The Minor in Russian offers a strong foundation in the Russian language and introduces students to Russian culture through literature and film. 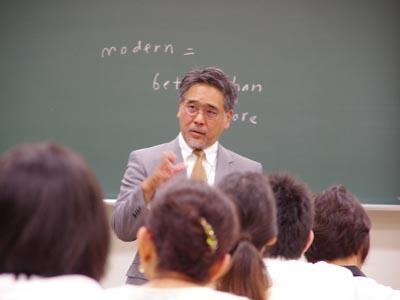 Professor and Department Chair of International Literary and Cultural Studies