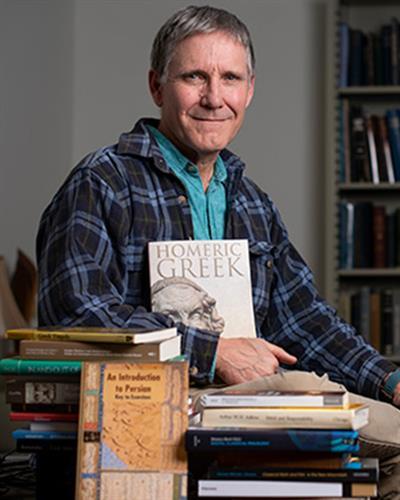 Gregory Crane's interests are twofold. On the one hand, he has published on a wide range of ancient Greek authors (including articles on Greek drama and Hellenistic poetry and a book on the Odyssey). Much of his traditional scholarly work has been devoted to Thucydides; his book The Blinded Eye: Thucydides and the New Written Word appeared from Rowman and Littlefield in 1996; his second Thucydides book (The Ancient Simplicity: Thucydides and the Limits of Political Realism) was published by the University of California Press in 1998.

At the same time, he has a long-standing interest in the relationship between the humanities and rapidly developing digital technology. He began this side of his work as a graduate student at Harvard when the Classical Studies Department purchased its first TLG authors on magnetic tape in the summer of 1982. He developed a Unix-based full text retrieval system for the TLG that was widely used in North America and Europe in the middle 1980s. He also helped establish a typesetting consortium to facilitate scholarly publishing. Since 1985 he has been engaged in planning and development of the Perseus Project, which he directs as the Editor-in-Chief. Besides supervising the Perseus Project as a whole, he has been primarily responsible for the development of the morphological analysis system which provides many of the links within the Perseus database.

From 1998 through 2006 he directed a grant from the Digital Library Initiative to study general problems of digital libraries in the humanities. Under the DLI-2 program, he worked on a range of topics, including such topics as London, the history of Mechanics, and the American Civil War. Each of these collections provided new insights into the implications of such new electronic tools on learning. In 2006, he produced a named entity identification system, published a 55 million word collection, and authored several publications describing the system.

With the rise of the Google Books project in 2004, he began to focus upon the problems and opportunities that arise when whole libraries rather than curated collections become available on-line. The broad range of projects that he supported with support from the DLI-2 program, the Institute for Museum and Library Services, and the Mellon Foundation provided a broad foundation within which to frame his current generation of research projects on Classical Studies at Perseus. Crane oversees the overall research program at Perseus.