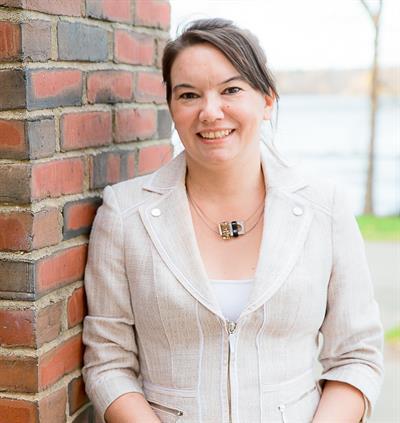 Marie-Claire Beaulieu is an associate professor of Classical Studies at Tufts University. Her major research areas are Greek mythology and digital humanities. She teaches a regular sequence of mythology and religion classes including Classical Mythology, Women in Greek Mythology, Journey of the Hero, and Greek Religion (in collaboration with the Department of Religion). She also regularly teaches Greek and Latin classes, including Medieval Latin, where students engage directly with medieval and early modern manuscripts held in the Tisch Library Special Collections.

In her publications, Prof. Beaulieu studies the interactions between culture, religion, and the human experience of the natural world. She is particularly interested in how the perception of landscapes and animals help shape cultures and beliefs. Her book The Sea in the Greek Imagination (University of Pennsylvania Press, 2016) explores the Greek representation of the sea as a cosmological space of transition between the living, the dead, and the gods. In a similar vein, she has recently led a team of international scholars in publishing a collection of essays on The Cultural History of the Sea in Antiquity, part of the broader Cultural History of the Sea series (Bloomsbury, 2021). Her current project, in collaboration with a team of experts from the humanities, computer science, and the biological sciences, is a digital edition of D'Arcy Thompson Glossary of Greek Birds. The project aims to explore the overlap between classical studies and ornithology in analyzing the perception of birds in Greek mythology.

With the Perseids Project, Prof. Beaulieu has engaged in large infrastructure-building initiatives in the digital humanities, designing collaborative editing and annotation software. She has also engaged extensively in interdisciplinary teaching, in particular with the Department of Computer Science, and her classes make frequent use of technology to involve students in the process of research. In general, Prof. Beaulieu is interested in using the digital medium to foster greater engagement with the ancient world through the study of language, art, and culture.
Read More Career Highlights / Publications Research Professional Activities Courses / Teaching Activities