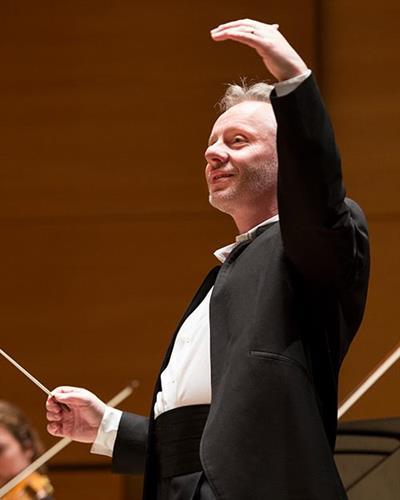 John Page began his career with the National Symphony Orchestra of Ireland in 2000. Prior to this he studied at King's College London, University College Dublin, Trinity College Dublin, and Harvard University. In Ireland, his 2002 performances of Viktor Ullmann's The Emperor of Atlantis with Opera Theatre Company garnered the prestigious Irish Times Opera of the Year award. He was subsequently invited to give a Lyric FM broadcast concert with the NSOI.

In 2006 Mr. Page was appointed to the faculty of New England Conservatory as Resident Conductor and Music Director of the NEC Sinfonietta and, in 2009, the NEC Symphony. Career highlights include collaboration with Maxim Shostakovich in a performance of his father's Ninth Symphony in 2006, a gala performance of Stravinsky's 1919 Firebird Suite in 2007 in conjunction with Boston Ballet and conducting the Boston premiere of Gunther Schuller's Five Etudes for Orchestra in 2010.

As a recording artist, he returns to Ireland frequently to record with the Irish Film Orchestra. He has received six platinum discs, one triple and one double for his recordings with PBS featured group, Celtic Woman.

In 2003, Mr. Page was appointed Zander Fellow to the Boston Philharmonic Orchestra. He became Music Director of the NEC Youth Chorale in 2004 and subsequently developed close links with Walnut Hill School. For three years he was invited to conduct their Gala performances at the Lincoln Center, New York, and Symphony Hall, Boston. In 2005, he was appointed to the newly created position of Assistant Conductor to the Boston Philharmonic.

While living in England, he worked with Modern Band at the Royal Opera House and Surrey Opera. He also assisted Benjamin Zander in his Philharmonia recordings of Mahler's First, Third and Sixth Symphonies and most recently the Grammy-nominated recording of Bruckner's Fifth Symphony, all released under the Telarc label.

More recently, John Page was Director of Large Ensembles for the New York City based Mimesis Ensemble, a group dedicated to the performance of music by living composers. He has performed with them in the Kennedy Center, Washington DC, and Symphony Space, New York, as well as conducting numerous studio recordings. He also traveled home to his native Northern Ireland to conduct the BBC Ulster Orchestra in 2009.